Tip projection is a term that surgeons use all the time, but that still confuses many patients and surgeons.

Some of this confusion is inevitable because so many surgeons perform open rhinoplasty.  If the skin is not connected to the nose and under its usual tension, it is simply impossible to understand or assess tip projection.

The key anatomical structure that determines whether tip projection is adequate is the central segment of the tip cartilages, the so-called middle crus.  (See the drawing on the right with the circle).  If that segment is long enough, the tip projects adequately.

Tip projection reflects tip cartilage strength, not lower nasal size.  This is an important distinction.  The photos in this slide show two patients who have lower noses of different size, but the smaller nose (on the left) has excessive projection and the larger nose (in the middle) has inadequate projection.  Skin volume and cartilage strength are two different things.  This is an important distinction for the surgeon to make before setting and operative plan. 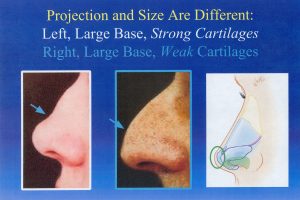 This is the end of Part I.

See you next week.