Last week I defined tip projection.  Here is an explanation of how to correct inadequate projection:

The photo in the middle illustrates inadequate tip projection: the tip is held up by the height of the bridge.  The photo on the right shows the surgical correction after I have reduced the bridge and increased tip strength with tip grafts, which effectively lengthened the deficient middle crus in this patient. This is the way Nature creates adequate tip projection (by making a middle crus that is long enough and tip cartilages that are strong enough), and so the result is very natural – appearing.  Tip projection can be determined quite accurately on the operating table if the operation is done closed.

It is therefore easy to see why projection is so hard to assess during open rhinoplasty because the effect of the tip on the skin can’t be judged unless the skin is in place and not swollen.  Once the open rhinoplasty surgeon has changed the tip cartilages, added columellar struts, sutures, and other grafts, he or she has no idea what the net effect has been on tip projection.

That is one of many reasons why the closed approach has such an advantage over open rhinoplasty.

Tip graft technique can also be modified to create the type of tip shape the patient desires – –
more round or more angular (sculptured).  When the procedure is done closed, no columellar
strut or sutures are needed because neither one
creates tip projection the way Nature does. 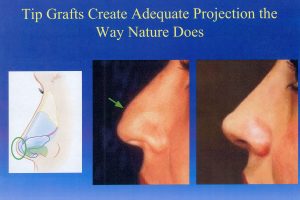